We are delighted our Director/Curator, Seamus Kealy, was interviewed in this month’s Visual Artists Newsletter by Jason Oakley. See the full interview here .

Jason Oakley: Talk me through the redevelopment/ extension by Sheridan Woods architects?
Séamus Kealy: The entire extension of The Model increases our scale by about 40%. It augments the redevelopment undertook in 2000 and balances cleanly with the original architecture.
The building is designed with the visitor in mind. It actually feels much more comfortable inside than the grandeur of the new façade might suggest. I have strong issues with intimidating architecture, especially giant art spaces that are sometimes un-inviting to non-art specialist audiences.
We’ve nine new artist studios. Seven are rented out by local artists, one is set aside as a recording studio, and the final one is an artist residential studio. Our guests include Boris Groys for the summer, and right now we have Italian artist Paolo Tamburella. Having all these studios furthers our role in being a hub of production, and this production will rotate as we change artists in the residential programme throughout the year.

We also have a new Black Box space that functions both as a cinema and a performance space for music. The space seats 240 for films and up to 400 standing for performances. We’re working with the IFI in Dublin to deliver a new cinema programme that will be delivered in the coming months. The gallery space has been extended; there is now a full circuit of galleries on the gallery floor of the building. And a new kitchen has been provided for a destination restaurant, also opening shortly.

JO: What are the key ideas behind the ‘Dorm’ exhibition in relation to the re-opening of the Model?
SK: As an opening show, I wanted Dorm to demonstrate a curatorial ethos  a genuine concern for public participation and accessibility, while addressing some currencies around art’s role and relationship to the public.
The concept for Dorm arose when I attended the Frieze Art Fair in October 2008. I was disgusted with the pomp, glamour and emptiness of that fair. It was my first attendance, and I had expectations of course. To have these expectations absolutely defeated by the vacuity of the fair provoked a kind of employable outrage: This structure of the art fair could be used, parodied even, to make an interesting project about how relevant contemporary art can, should, could and does get produced. So Dorm is just that  it takes the structure of an art fair and returns this format to an ethos of collaboration and non-commercial, ephemeral and participatory projects.
Inherent in the project are questions about the present and future conditions for art production, especially in this more challenging economic climate. We need to look forward to support artists without institutional trappings as well as explore means that artists can develop their work in a different setting. For me, it’s an exciting time 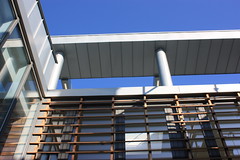 The project also tackles the myth of individual genius by stressing the collaborative nature of much art production, and emphasizes the importance of that today. The historical links to collective practice from the 1950s onwards are also vital for taking a hard look at artistic practice today. For example, the general lack of political challenge in contemporary art, despite much theoretical rhetoric, appears here from a different angle. Artist groups and collectives had often aligned themselves with political activism, or had even been political activists themselves. Along with a “cultural critique” there was action. There are instances of this also in the contemporary projects at The Model currently, for example WochenKlausur or Thierry Geoffroy’s work. Another matter that Dorm faces straight on, which is why I curated this project as the opening project, is that of the art institution as a hub, not as a museal space of quiet reflection and escapism. Art spaces have a role to play in the shaping of cultural and socio-political identities, and this should be a noisier affair in my mind than it usually is.

JO: The re-opening of the gallery got some good local and national print media coverage. Is an engagement with mainstream media is a conscious strategy for the Model?
SK: Yes. This has always been an interest of mine, actually. It can be tricky to find means of mediating contemporary art to the press, which will invariably mis-interpret the artwork if one is not careful. However, I would be as interested if not more interested  in having ‘Dorm’ receiving coverage on the evening news rather than in Art Forum. The art world is often navel-gazing and even defeatist when it comes to engaging broader audiences. We can all agree with Debord and identify and fight the spectacle, but this doesn’t mean turning away from the apparatus altogether. It’s the responsibility of curators to broach creative means of distributing the ideas of exhibitions. Mainstream media is one tool to employ in that regard.

JO: Could you talk a bit more about the ‘The anti-catalogue’ produced for ‘Dorm’?
SK: Instead of mystifying or even reifying artists and their work, as catalogues often function in doing (especially making the work more commodifiable), I am more interested in building serious discussion and analysis around projects, at different levels. Anti-catalogue is a means of seeking a deeper level of engagement with the project, and also a means of enabling the project to spill out beyond the gallery walls. It is also a collaborative effort, and will continue to be, with different commissioned editors and writers. This doesn’t mean that we will no longer do catalogues, we will, albeit more occasionally than previously.
The pocket-sized format of the publication should, I hope, also attract new readers to art discourse, while hopefully enabling the rest of us to resist tossing the texts away over the usual frustrations of much art criticism: empty rhetoric, solipsistic opinion-making, useless romanticisations, badly researched ideas, and far too lengthy, un-engaging texts.

JO: And the Model facilitates other different modes and levels of access and engagement  through the Model’s blog, Young Model and the education programme etc. Is this evidence of deliberately holistic curatorial approach?
SK: It’s evidence, rather, of a great team at The Model that responds to the programme actively and mediates it in various forms to the public. But again, it is the responsibility of the curator to ensure that projects are communicated as broadly as possible, so we are fortunate enough to have a great website, a leading education programme, and people who engage in various forms of outreach. Gallery outreach is critical today.
In a way, we need to act like the church ensuring that the message goes out to as many people as possible, so that we can draw people into our walls. The church would believe that it is sharing spiritual salvation; we would believe that we are sharing, provoking even, cultural reflection. Both come to form some sort of identity in a community, whether subtle or not. It might sound idealistic but this has always been an important aspect of curatorial practice for me.
JO: What do you think the role of an historical collection like the Niland collection in the context of the Model is?
SK: We will have the Niland collection displayed on rotation throughout the year. This is a crucial aspect of our multifarious but focused role in providing programming. We have a strong relationship to contemporary art as well as to local and national traditions. We produce shows from our collection and bring new forms of discourse and scholarship around them. For example, this summer ‘Jack B. Yeats: The Outsider’, which is curated by Brian O’Doherty and Emer McGarry, opens alongside a new film by Irish-born artist Duncan Campbell. We continually seek ways of complementing these seemingly divergent projects. With these two shows, we find parallels in discussions around conflict, reconciliation and Irish identity both pre and post troubles. Both Brian and Duncan will participate in a symposium this September in that context.

JO: From the experience of working in an off-site mode and in temporary premises, will we see more ‘extensions’ of the Model are all of its activities now retracted to the model building?
SK: In addition to our outreach and young model programmes, which reach into Sligo, North West and Northern communities, we will continue off-site projects where possible. We’ve commissioned artist Séamus Nolan with his project The City Centre, which sees him revitalizing Sligo’s Trades Club. This is a long-term project that we’ve had a close relationship to and will continue to maintain a relationship with. Other tentacular projects might see us continuing with off-site projects in Sligo, and of course, out of Sligo. We have many partnerships, and continue to generate new ones all the time, and this means that we are never just contained to the mothership.

JO: Does the Model see itself as a cultural catalyst for the area?
SK: Absolutely. There is a fine dance to play between serving national and international Freee’s booth at ‘Dorm audiences while being, as you say, a ‘catalyst’ for the region. It is in our vision statement to be a “hub for discourse and gatherings around contemporary art and culture” and to develop “relevant, urgent programming.” This means that we have a close relationship to local audiences with every aspect of our programme, and of course, the programme’s overall proximity to socio-political concerns is relevant here. Essentially, we wish to attract people from the region especially to hang out here. We’re not simply a visiting site for tourists and culture vultures  and the building design is key to that and complements the programme that way. A civic space at our new façade will also be developed shortly, and that will enhance this role of being the place to be.

JO: What else can we look forward to from the Model?
SK: Since I spoke about the Yeats show above, I’ll mention briefly the Kabakov show. Their work speaks for itself and we’re delighted to have them come over in October to install their project Angelology. This will be a full installation throughout the space around the idea of an angel that has fallen to earth. The project will be highly accessible while maintaining that splendid romanticism that the Kabakovs employ so well, without falling into sentimentalism. It will be a project for everyone.

Your ticket for the: Director Seamus Kealy is interviewed in Visual Artists News Sheet